The Israel Police was refusing on Wednesday to publicize the findings of an internal investigation into the conduct of officers at the funeral procession for slain Al Jazeera journalist Shireen Abu Akleh, during which police attacked pallbearers, causing them to nearly drop her casket.

Instead, law enforcement officials sufficed with a statement announcing that the findings had been delivered to Police Commissioner Kobi Shabtai and Public Security Minister Omer Barlev, along with a corresponding statement in which the former appeared to acknowledge some wrongdoing by the officers.

“The funeral procession of journalist Shireen Abu Akleh was a complex event. It is impossible to remain indifferent to the difficult scenes,” Shabtai said in a statement issued upon the submission of police findings from the internal investigation that was launched into officers’ conduct at the funeral.

Shabtai said the incident needed to be properly reviewed, “so that [future] sensitive events such as these are not violently disturbed by rioters” — an apparent attempt to finger participants at the funeral as the ones responsible for the police response and the violent scenes that unfolded.

“Under my guidance, the police reviewed the conduct of the forces on the ground, with the aim of drawing lessons and improving operational conduct in similar future incidents,” he said, adding that he continues to trust the officers under his command “to do their job faithfully for the safety of the entire public.”

Asked why there was no mention of what the investigation had concluded, a police source told Ynet, “That’s it for now.”

Another video showing ISF elements who stormed Saint Joseph Hospital beating a group of Palestinians carrying the body of late Journalist Shireen Abu Aqla who was shot dead by ISF during ISF operation in Jenin City three days ago. pic.twitter.com/RAhqpbxDGb

The source said the investigation went well and that no individual officers would be rebuked.

The police statement was issued at 9:30 pm, apparently indicating law enforcement officials’ desire not to draw attention to the matter.

Police have faced intense scrutiny and global criticism over officers’ violent behavior at the May 13 funeral, which also saw officers, clubs drawn, enter the Saint Joseph’s Hospital itself. Shabtai launched the internal investigation the next day. 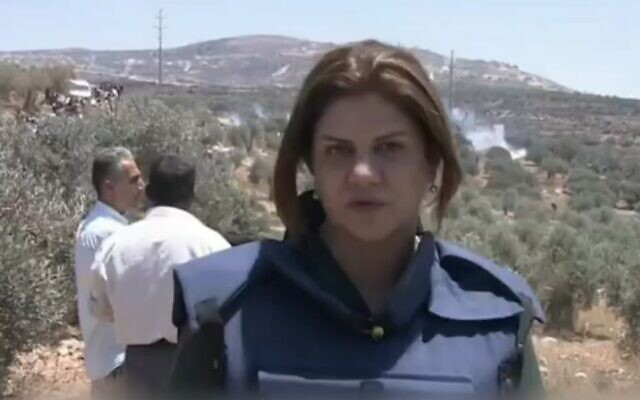 According to a Channel 13 report last month, the internal police report concluded that the use of force — including stun grenades — could have been avoided.

The network said the internal investigation also found that police received intelligence about a potential attempt by thousands of demonstrators to reach Jerusalem’s Haim Bar-Lev Street, to disturb the peace and try to harm Jews driving there. Police said it was therefore necessary to prevent crowds from reaching the road and that was the reason the casket was taken by a hearse to the Jaffa Gate in Jerusalem’s Old City.

Abu Akleh, a Palestinian-American and a 25-year veteran of the Al Jazeera satellite channel, was killed on May 11 during clashes between Israeli troops and Palestinian gunmen while covering an Israeli military raid in the Jenin refugee camp in the West Bank. The Palestinians have accused Israeli forces of intentionally targeting her, while Israel has said it cannot conclude who was responsible so long as the Palestinian Authority refuses to hand over the lethal bullet used to kill Abu Akleh. The PA has thus far refused to do so, convinced Israel will whitewash the killing.

Video footage documented both the police violence against the pallbearers and others outside the hospital, and showed dozens of Israel Police officers rushing into the hospital, hitting and shoving people inside, including patients, and firing from the grounds of the medical center. 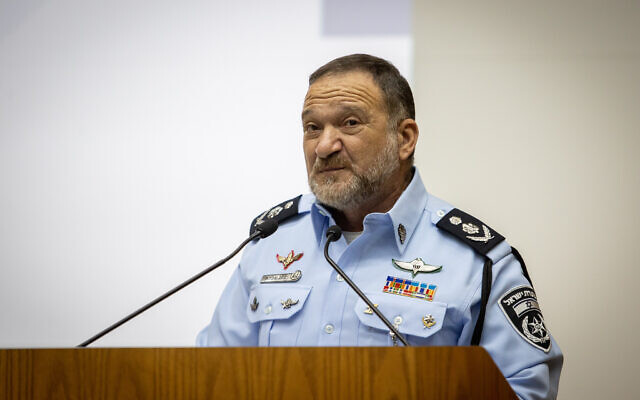 Chief of police Kobi Shabtai attends a ceremony honoring Israeli security forces, at the Knesset in Jerusalem, May 17, 2022. (Yonatan Sindel/Flash90)

Some of the video clips — including security footage from inside Saint Joseph’s Hospital — were presented by local Christian leaders at a press conference during which they tore into police conduct during Abu Akleh’s funeral.

The Palestinian Red Crescent emergency service reported that its medics treated 33 Palestinians for injuries during the funeral; six were hospitalized.

Initial reports of the event said that police had designated the funeral procession to begin at the Jaffa Gate, but a group of Palestinians at the hospital seized Abu Akleh’s casket in an attempt to begin an impromptu march.

After a brief standoff, officers rushed the crowd, beating mourners and firing stun grenades into the crowd. 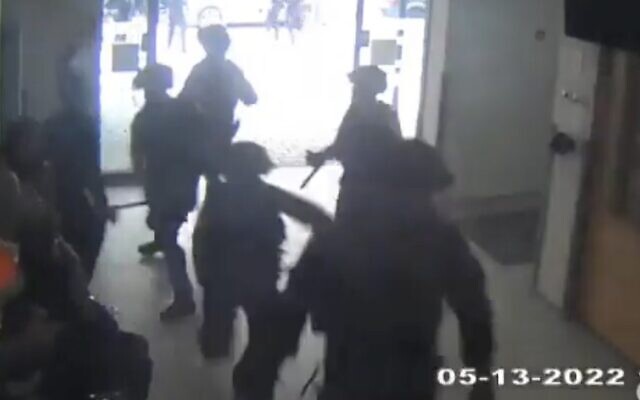 In official statements, police later said a mob of 300 rioters had seized the casket against the wishes of the family, and intended to march with it from the hospital to Jaffa Gate, in breach of understanding the police had reached with the family. Anton Abu Akleh, Shireen’s elder brother, told The Times of Israel this was untrue and that the family and mourners had hoped to hold a “smooth procession” but were “bombarded” by officers as they left the hospital.

Abu Akleh’s body was eventually driven by van from the hospital, surrounded by a police escort, to the Greek Melkite Church near Jaffa Gate, and from there in procession on foot for burial at a cemetery on Mount Zion. Officers tore Palestinian flags off the van before escorting it to the church.

Police also released a video of a commander warning the crowd that he would not allow the procession to go ahead if they kept singing “nationalist and inciting chants.”