For those who’ve been itching to see Hayden Christensen as Anakin Skywalker in Obi-Wan Kenobithis week’s installment of the Disney+ series doesn’t disappoint.

The season’s penultimate episode kicks off with a flashback of Obi-Wan training Anakin around the time of Star Wars: Attack of the Clones, when the Padawan still rocked the Jedi braid and wielded a blue lightsaber. Cut to Darth Vader staring out of a window only to be interrupted by Reva, who informs the Sith lord that his former master is now on Jabiim. Vader rewards her by christening her the new Grand Inquisitor.

Meanwhile, the transport carrying Obi-Wan, Tala and Leia lands on Jabiim, where Kenobi is surprised to see Haja among the rebels. After getting into it with Reva on Daiyu, Haja explains, he too is now wanted by the Empire.

In space, Vader sets his attack plan into motion. He orders the rebel base to be locked down, and Reva uses Lola — the droid she hijacked with a tracker — to close the hangar roof and trap everyone inside. And while the rebels think Reva is behind the impending attack, Obi-Wan knows Vader is the true culprit. This scene is followed by another flashback of Anakin and Kenobi training, this time illustrating Anakin’s penchant for going for the kill. 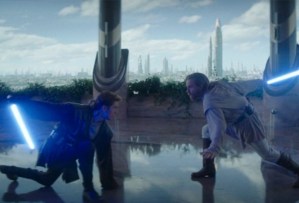 An army of stormtroopers and purge troopers line up outside the rebel base, and Reva moves to the frontlines to give the OK for their attack to begin. As the agents of the Empire attempt to blast through the front door, Roken tries to open the hangar roof but it malfunctions. Leia volunteers to craw inside and check the vents/wiring, and receives Obi-Wan’s approval when Roken objects to her involvement.

In secret, Kenobi views an urgent message from Bail Organa, who worries that he has been found out by Vader. If the Alderaan senator doesn’t hear from Kenobi soon, he’ll head to Tatooine to look after young Luke Skywalker himself. It’s in this moment that we also learn why Tala joined the rebellion. As an officer of the Empire, she watched Inquisitors round up four force-sensitive families for allegedly not paying their taxes. She knew it was a lie when they murdered 14 people, including six children, and now works to make things better.

With stormtroopers working their way through the doors, the rebels need more time to evacuate. That’s when Obi-Wan comes up with a plan to chat with Reva. Speaking to her through a door, he wonders how Reva knew Darth Vader was Anakin since that was a well=kept secret and she was too young to personally know him. He then realizes she was at the Jedi temple when Anakin murdered the younglings under Order 66 (as alluded to in Star Wars: Revenge of the Sith). 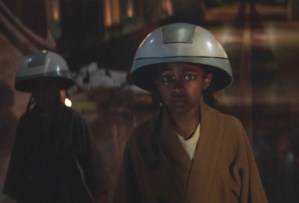 A flashback confirms Reva as the girl from the opening scene in the series premiere. As recalled by Reva, Anakin interrupted the younglings’ escape and she only survived by playing dead among her classmates’ bodies. Hearing this, Obi-Wan offers to help with his covert revenge mission, but Reva isn’t convinced that he’s willing to kill his former apprentice. She doesn’t want or need his aid, and in an angry fit, uses his lightsaber to cut through the door. A battle ensues, with stormtroopers opening fire and the rebels frantically retreating. Both Tala and the non-verbal droid NED-B are critically wounded in the chaos, after which Tala sacrifices herself by setting off an explosion to buy the others time to escape.

Tala’s plan works and the rebels gather at the hangar, waiting for Leia to fix the doors so they can fly out. But Obi-Wan senses Vader nearby and knows that it’s over. He thus surrenders himself to a pair of stormtroopers, but not before offering Reva another chance to end this together. She takes him up on it and has Kenobi delivered back inside the base so that when Vader arrives, he makes a beeline for his former master.

Leia finally fixes the hangar roof — after noticing/removing the tracker from Lola — and the rebels start loading onto a transport. Vader arrives just as it takes to the air, then Force-drags the massive aircraft back to the ground. However, Obi-Wan knew exactly what Vader would do and planned for this. As Vader tears the walls of the transport away with the Force, a smaller ship hidden inside the transport takes off with the rebels (along with Obi-Wan and Leia) on board. It looks like the master, just as he did in another flashback, has outsmarted his apprentice.

As Vader stares daggers at the escaping rebels, Reva approaches him from behind, a hand on her lightsaber ready to make her move. But when fires it up and she goes for the kill, Vader blocks her, and another battle ensues. Vader overpowers Reva, even splitting her double-sided lightsaber in two and offering the Inquisitor one of them to duel, before easily reclaiming it. Knowing her death is coming, Reva can only look up at Vader while kneeling, and accept the blow of the lightsaber to her gut. As Vader declares her services no longer needed, the original, not-dead Grand Inquisitor shows up to inform her that they’re going to dump her where they found her: in the gutter.

On the transport, Roken delivers the bad news to Obi-Wan that the hyperdrive is down and the Empire is on their tail. But Kenobi is worried about something else he can’t quite place. What he doesn’t yet know is that Reva has found the communicator Haja dropped while escaping, which contains Organa’s message about Luke. Meanwhile on Tatooine, Luke sleeps peacefully in his bed, unaware of the danger headed his way.

We’ve got a really bad feeling about this.

What did you think of this week’s episode of Obi-Wan Kenobi? Were you excited to see Hayden Christensen as Anakin again? Drop a comment below.