Jennifer Aniston is facing backlash following comments she made about the ways internet stars find fame in modern society, with angry fans accusing the star of trying to ‘gatekeep’ the Hollywood elite.

The Friends star, 53, caused controversy with the comments she made during a sit down interview with Pam & Tommy star Sebastian Stan, 39, during which she reflected on the way the likes of Paris Hilton and Monica Lewinsky’s fame was shaped by the rise of internet culture.

In a segment of the Actors on Actors interview for Variety, the pair had been discussing the infamous Pamela Anderson and Tommy Lee sex tape leak in 1995 which Stan’s Hulu series was based upon, leading Aniston to discuss internet culture at the time. 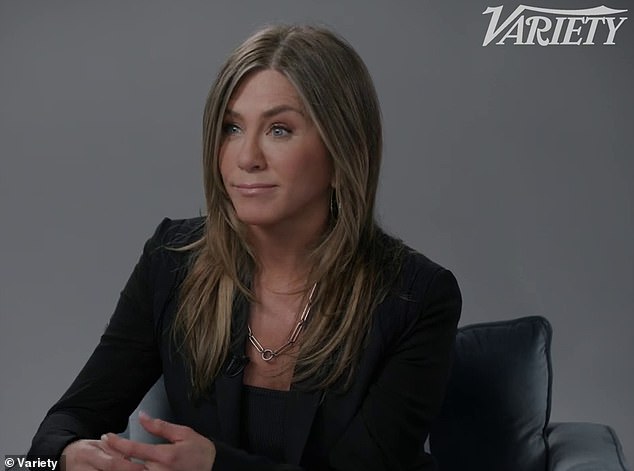 Out of touch? Jennifer Aniston has come under fire for claiming that stars finding fame through ‘internet culture’ are ‘diluting the actor’s job’ 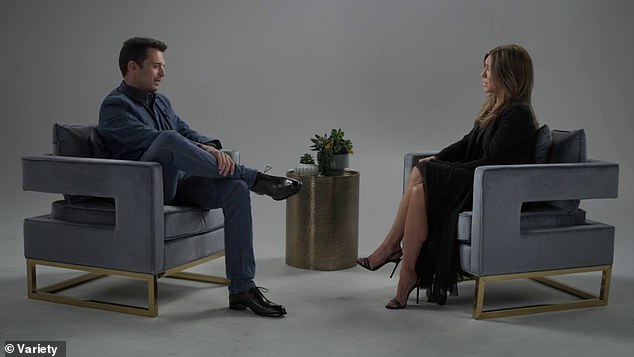 Actors on Actors: Aniston’s comments were made during a 30-minute sit down with Pam & Tommy star Sebastian Stan

‘This thing of people becoming famous for basically doing nothing but yet having these incredible careers. And then women’s reputation… I mean — Paris Hilton, Monica Lewinsky, all those.’

Lewinsky was involved in a sex scandal with then-President Bill Clinton in 1998 after his two-year sexual relationship with the 24-year-old White House intern came to light, while Paris Hilton’s private sex tape featuring herself and then-boyfriend Rick Salomon was leaked onto the internet in 2004.

Stan replied: ‘When you look back at the ’90s, you do see how many things have happened in that decade. Even the OJ Simpson thing was actually the beginning of 24-hour news.’

Not impressed: Twitter users were quick to call out the Friends star for her comments, claiming that her career was boosted by the fact her parents Nancy Dow and John Aniston are also actors

The Just Go With It star’s comment soon sparked a furious response from some Twitter users who felt the Hollywood star’s reflections about finding fame were ironic due to the fact her parents are late actress Nancy Dow and Days of Our Lives star John Aniston, 88.

One fan tweeted: ‘Jennifer Aniston plays the same character which is just a version of herself in every movie and it consistently gives nothing. The only that saves her is she has pretty okay co stars to save as comic relief.. always the NEPOTISM babies with no talent wanting to give their take.’

Another wrote: ‘Jennifer Aniston needs to calm down with her opinions when her nepotism got her into the industry and now she continues to make $20million per year just off syndication from a show that ended decades ago.’

‘they’re so mad they can’t gatekeep the title of celebrity to stay in their weird nepotism Hollywood elite (sic),’ another Twitter user stated. 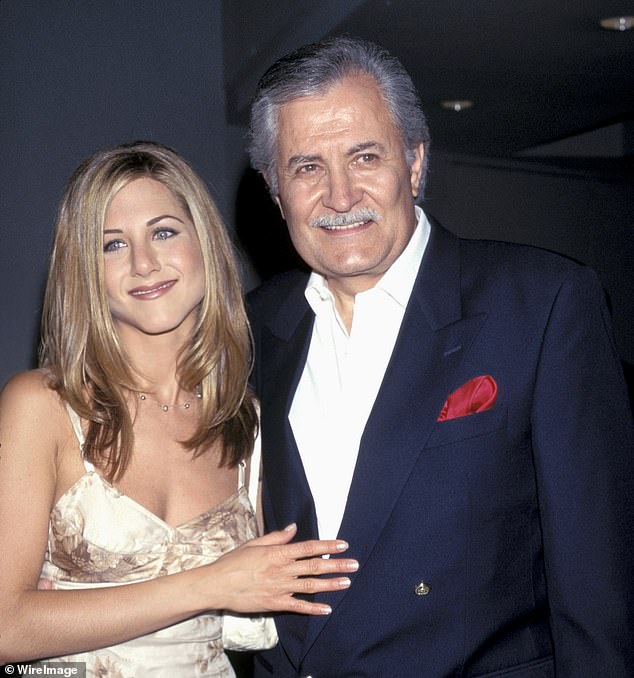 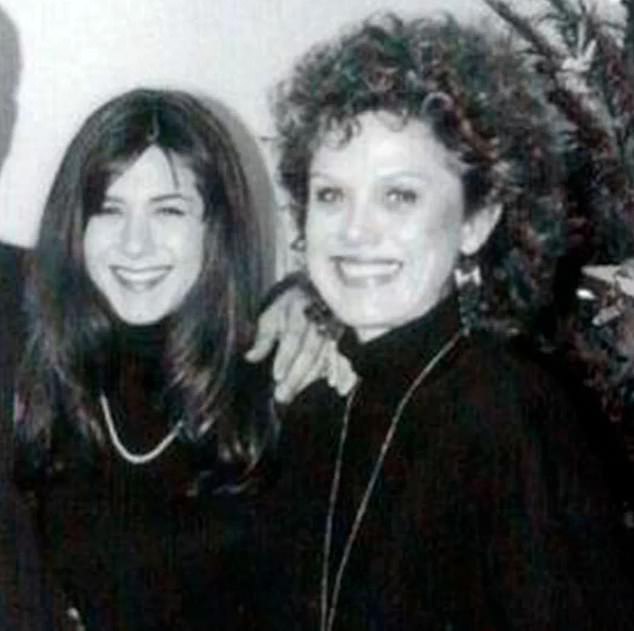 Estranged: Aniston’s late mother Nancy Dow starred in shows like The Beverly Hillbillies and The Wild Wild West; the pair famously had a 15-year feud over a tell-all book in 1999

Times are changing: Online commenters argued that the actress had failed to realize how social media was helping talent from ‘overlooked’ communities find fame

One fan mused: ‘Jennifer Aniston (nepotism baby) not talking about the true injustice to the acting industry (nepotism) and instead pretending the acting profession is degraded when people from all walks of life have the opportunity to become actors based on their own hard work and virality (sic)’

Another added: ‘“I feel so lucky that nepotism got me in before TikTok, YouTube, Twitch, and other services gave other people the opportunity to be seen. I would have ~never~ been able to compete against such a candidate pool.” – Jennifer Aniston, basically’.

However, some fans spoke out in defense of the Marley & Me star claiming she was right to say that internet platforms have allowed influencers to get roles traditionally given to actors.

‘She’s not wrong… the early 00’s was revolutionizing. You actually had to have talent,’ one person commented.

Another added: ‘She kind of has a point though. Trained actors and those just coming out of training have been getting sidelined for influencers with no training whatsoever for a while now. And it’s happening across the board, no matter the race/class.’

Aniston’s parents divorced when she was nine years old, and the actress had an estranged relationship with her father – who initially discouraged her from pursing acting.

In 2012, The Bounty Hunter star told The Hollywood Reporter: ‘My dad’s advice has always been: ”Don’t do it. Become a doctor. Become a lawyer.”

‘He didn’t want me to be heartbroken because he knew it was a tough business. It compelled me to go for it even harder. Do what keeps you happy, and don’t ever let people box you in.’ 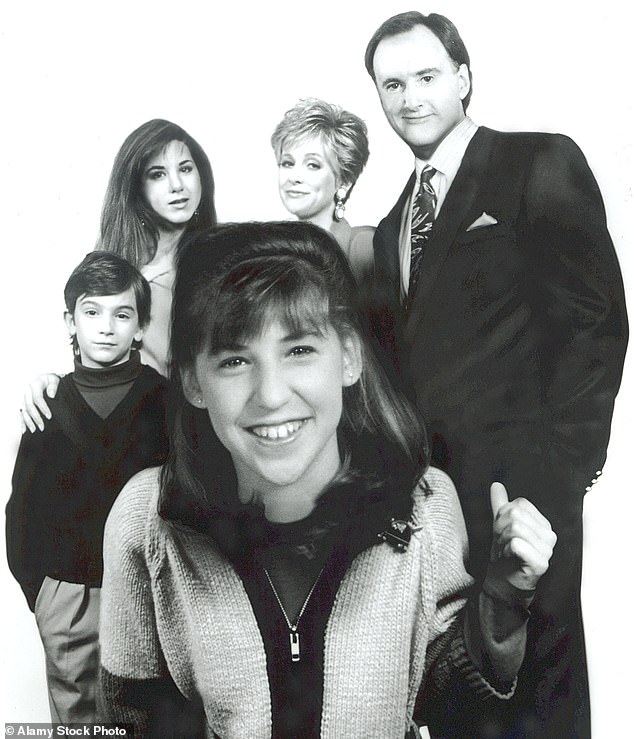 Born to be a star: Aniston landed her first TV role alongside The Big Bang Theory star Mayim Bialik (center) in the short-lived 1990 series, Molloy

However, the veteran actor was supportive of her career once she began to make her name in Hollywood.

The Bruce Almighty star landed obtained his first regular television role on Molloy in 1990 and appeared in Ferris Bueller, a television adaptation of the 1986 film Ferris Bueller’s Day Off.

Both shows were canceled and the star had a few more minor roles before landing her breakout part as Rachel Green in Friends in 1994.

DailyMail.com has reached out to Jennifer Aniston’s representatives for comment.