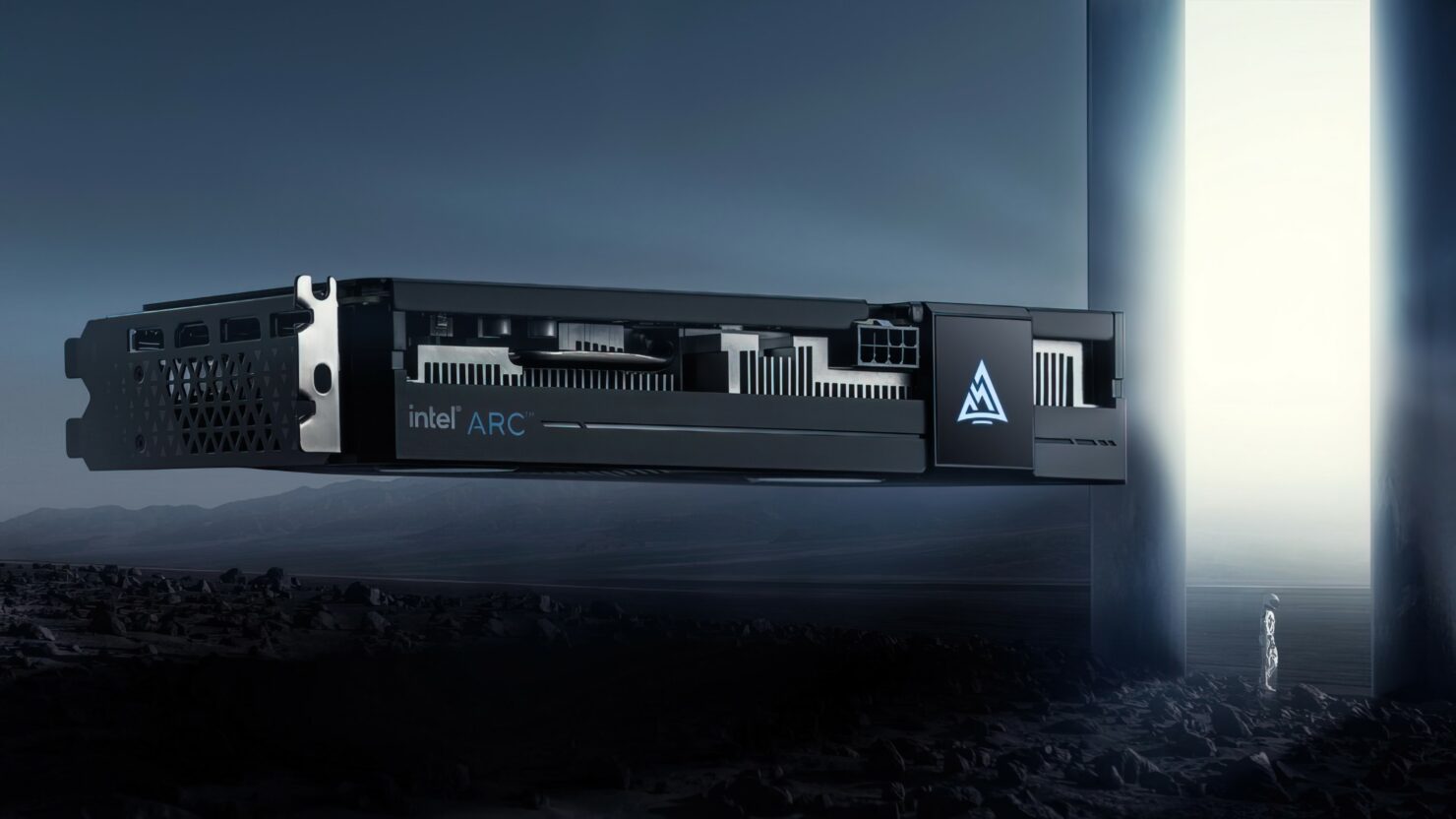 Intel’s Arc A380 discrete graphics card has finally launched in China at roughly the exact time frame we predicted and while a couple of initial reviews have been posted, we hadn’t seen a more holistic overview yet so decided to reach out to some of our Chinese colleagues. We got our hands on the official data provided for the A380 GPU; which tells the story of Intel’s first real discrete graphics card with tons of potential.

Let’s begin with the specifications first. 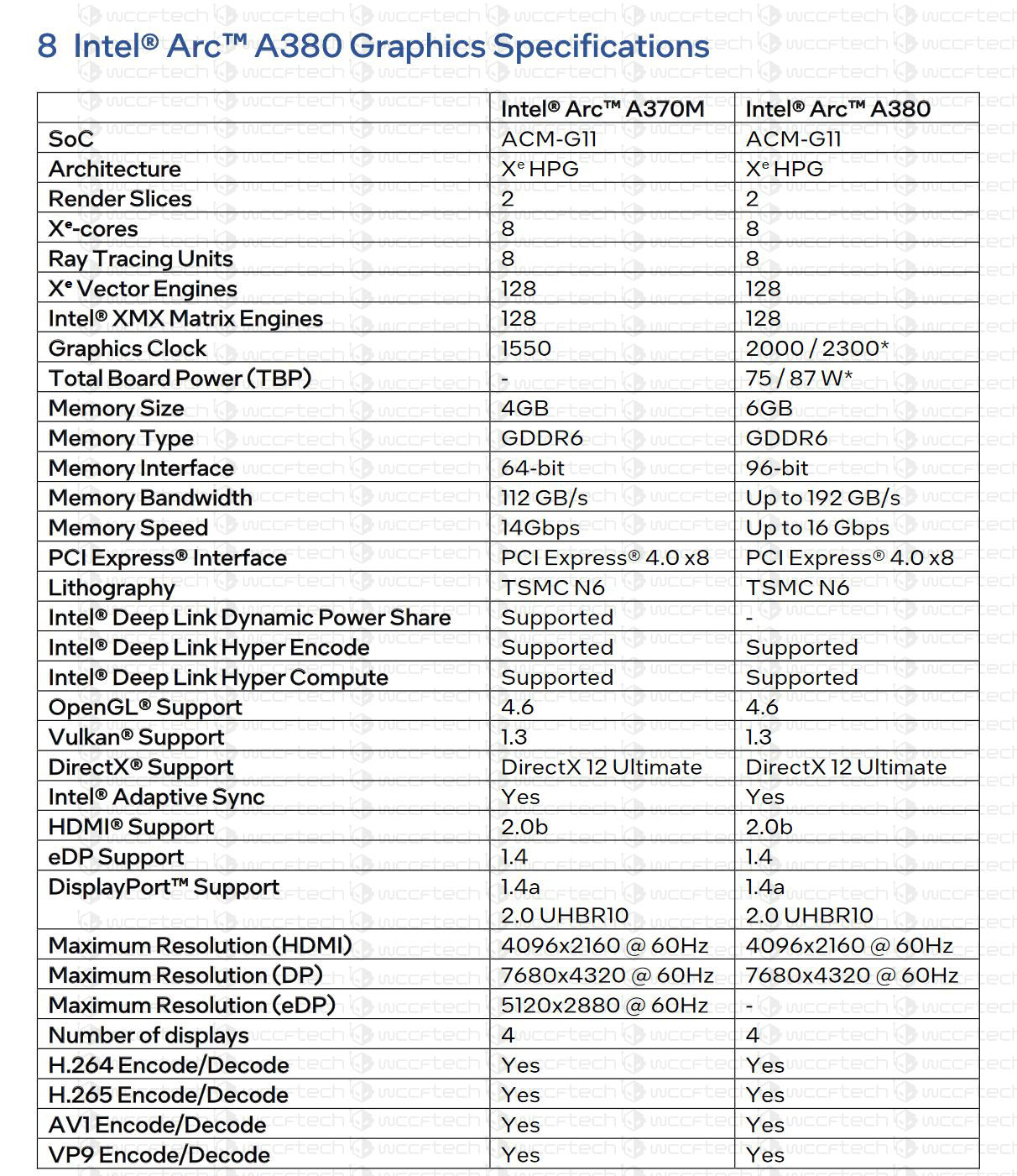 The Intel Arc A380 graphics card is built on the TSMC N6 process and is the company’s first discrete graphics card launch. The actual Chinese MSRP of the GPU is 880 Yuan but after VAT (17%) it comes out to almost 1030 Yuan. That said – we expect the US MSRP to be closer to the post-VAT pricing in Yuan rather than the pre-VAT pricing. It has 1024 FP32 cores (each Xe core has 128 FP32 cores) and 6GB of GDDR6 memory clocked at 16Gbps. Mated to a 96-bit bus width, this results in a bandwidth of 192 GB/s – more than enough for a card of its class. The TBP of the GPU is configurable between 75W to 87W with the clock speed correspondingly configurable between 2 GHz to 2.35 GHz.

Interestingly, Intel allows a “beyond 87W” option as well – which is probably what the custom GPUs you have seen so far are using to reach clock speeds well in excess of 2.35 GHz. The Intel Arc A380 GPU is therefore a 4 TFLOP to 4.8 TFLOP GPU which combined with AI up-scaling tech like XeSS – should be ample for the 1080p entry level gaming segment. Before we go any further, here is the full block diagram of the Intel Arc A380:

Now let’s get to the juicy part. We have already seen benchmarks of 6 games that were leaked earlier and we can add at least 20 more titles to that arena. With benchmarks, more is always better and 32 is roughly agreed to be the point where your data starts to get statistically significant. That said, we were extremely impressed by how transparent Intel is in its official guide (as you will see below). First, let’s look at the test configuration: 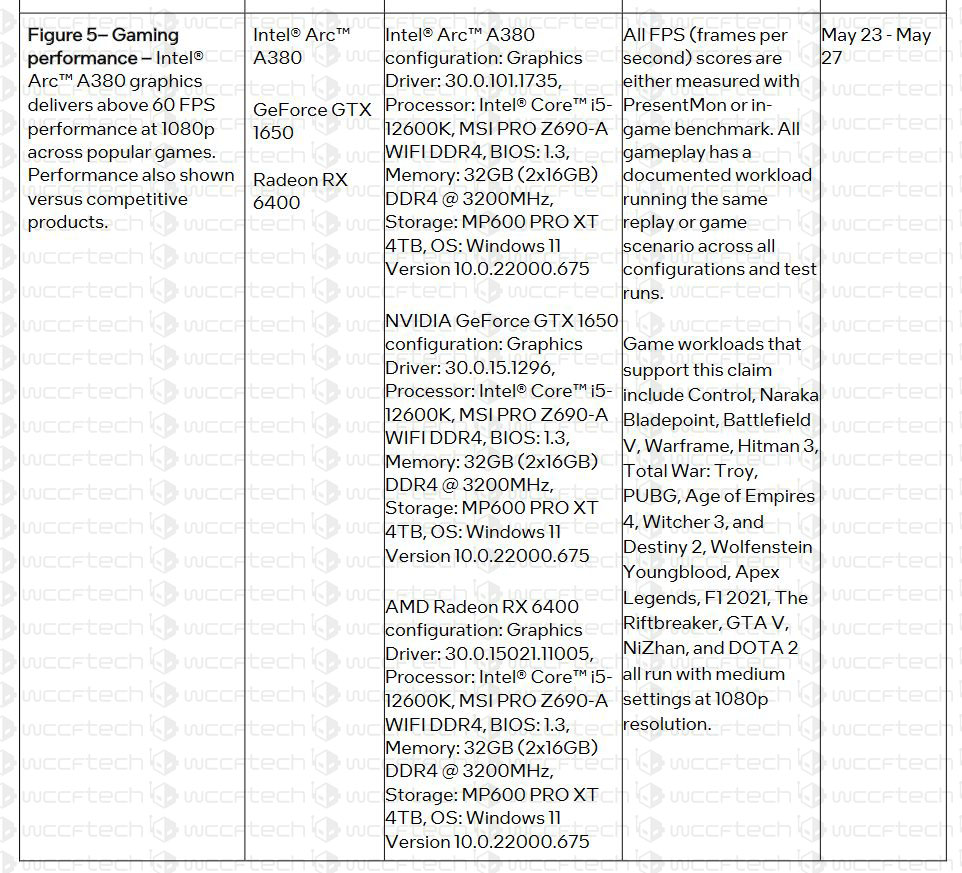 All of the testing in the official benchmarks was done using an Intel Core i5 12600k with 32 GB of 3200 MHz DDR4 RAM and Windows 11 OS and a 4TB NVME SSD. Only the GPUs, ie the GTX 1650, RX 6400 and Intel Arc A380 were swapped between them. Testing was conducted almost a month back so its worth noting that driver performance would almost certainly have increased during this time: 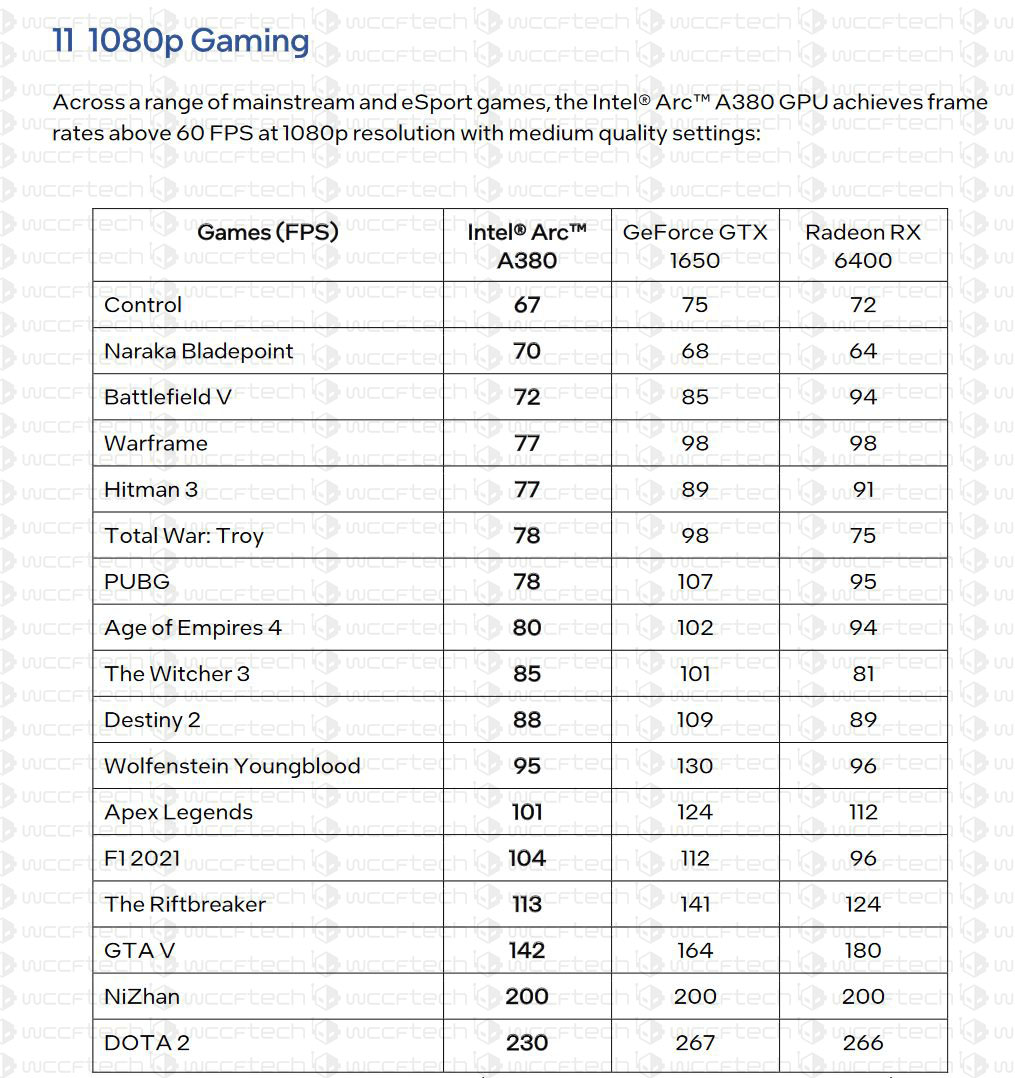 As we can see, the Intel Arc A380 trades blows with the AMD RX 6400 and (less occasionally) with the NVIDIA GTX 1650. It actually beats the RX 6400 in Total War: Troy, Naraka Bladepoint, The Witcher 3 and F1 2021. Considering this is the official documentation, its actually pretty cool that Intel did not present a one-sided story about its upcoming GPU. Here is also where the story gets really interesting. FineWine™ is a term that AMD fans and readers of this site would be very familiar with and was a popular term to describe AMD’s ongoing post-launch driver development back in the days when it used to be cash-strapped and was the underdog.

What we are seeing here, similarly, is very much a FineWine™ scenario. Allow me to expand: the Intel Arc A380 absolutely crushes the GTX 1650 and RX 6400 in 3DMark’s TimeSpy benchmark and even beats the RX 6500 XT. So very clearly, the hardware potential is right there and only the software is lacking. It is clear that the development team must have optimized drivers for this synthetic benchmark – and shows the true locked potential of the hardware. The thing we have to remember is that NVIDIA and AMD have both had decades to optimize the driver code for their GPUs while Intel started building discrete GPUs just a few years ago (lets not get into the Larabee debate).

Based on what we are seeing in 3DMark Timespy, the Intel Arc A380 (depending on how its priced in the US) could turn out to be an absolute bargain for gamers. The onus is very much on Intel to continue to develop its drivers and deliver the performance potential we are seeing here. After all, at the end of the day, all that matters is whether Intel is able to deliver on its performance per dollar value proposition. 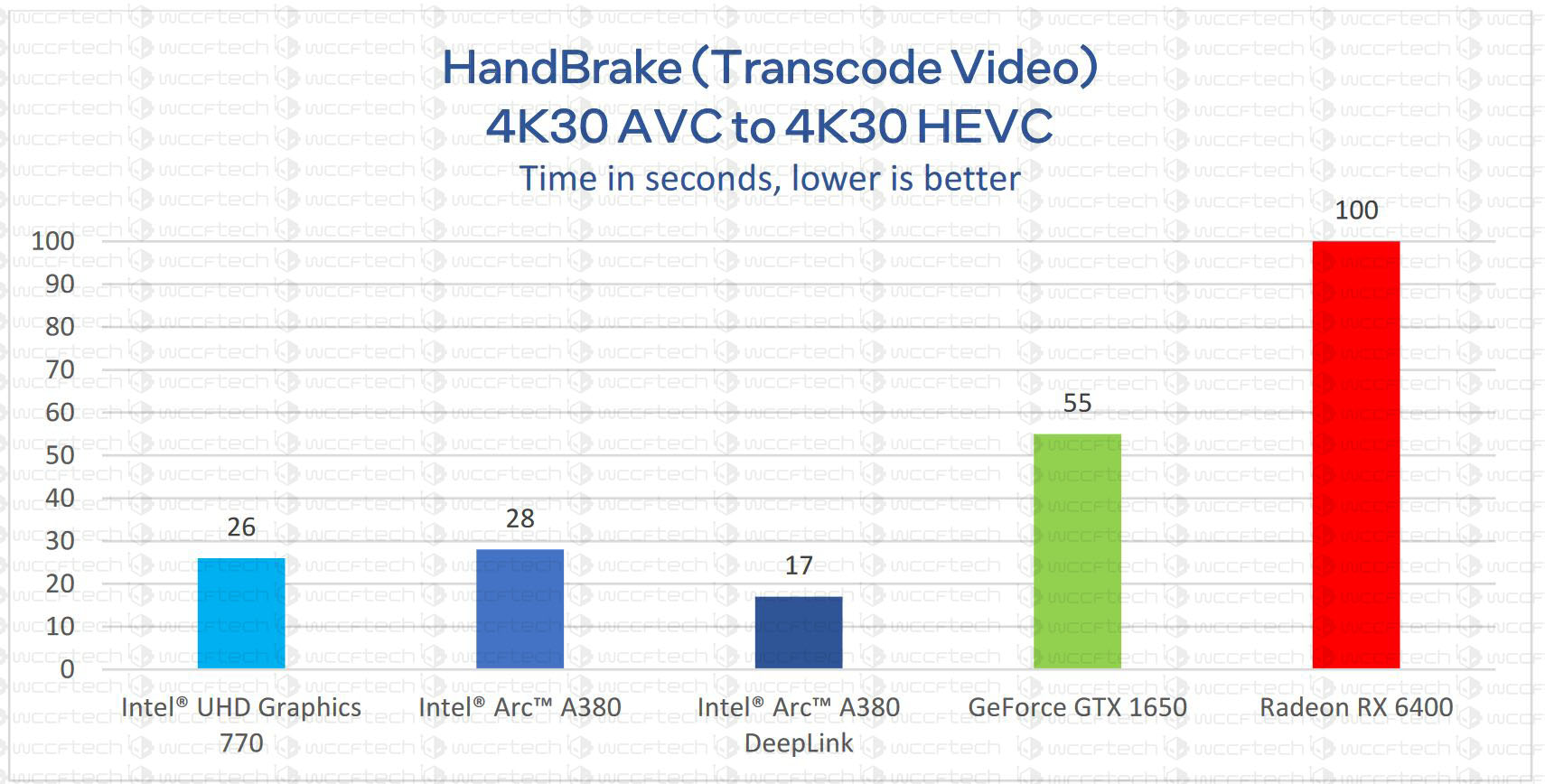 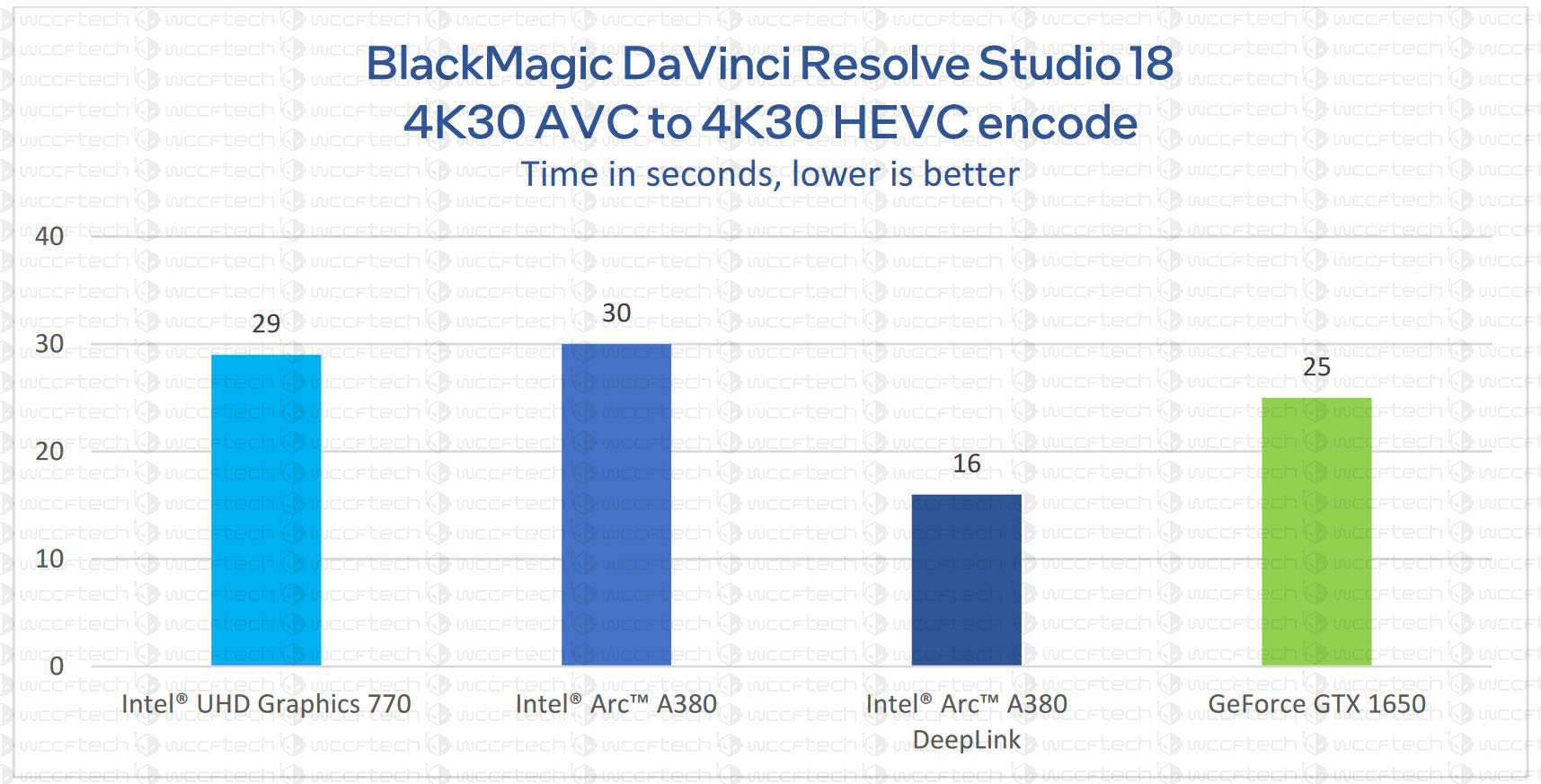 Compute workloads are once again a mixed bag when it comes to Intel Arc A380. It beats out both the GTX 1650 and RX 6400 handily in HandBrake and is slightly worse than the GTX 1650 in DaVinci Resolve.

It is even possible that gamers in the NA and EU will see an improvement in performance when Arc discrete GPUs launch in non-Chinese territories. Depending on how fast Intel is able to optimize the driver stacks for various games and how they price their Arc GPUs (131 USD would be a steal for the A380 but I suspect we will see an MSRP closer to 150 USD when it does launch in the US) – even 150 USD could be a potential win considering it has the hardware to be just behind the NVIDIA RTX 3050 – which is a $249 MSRP GPU. Intel XeSS will be the cherry on top of the cake.