Her daughter is heralded as one of the world’s most stylish women, so it’s no wonder Carole Middleton took inspiration from the Duchess of Cambridge’s wardrobe for her outing to Royal Ascot today.

The entrepreneur, 67, looked elegant in ME+EM’s silk shirt dress which features a dipped midi hemline and pleated detailing, the exact same dress worn by Kate to a royal engagement in May last year.

Carole teamed the frock with a black openwork hat with feathered adornments, while her husband Michael, 72, looked dapper in a traditional top hat and tails.

The couple’s daughter, Kate, previously wore the dress to meet with a five-year-old cancer patient who featured in her Hold Still photography project after she was photographed kissing her father through a window during lockdown.

Kate, 40, welcomed Mila Sneddon, of Falkirk, for tea at Holyroodhouse in May 2021. during a week-long visit to Scotland. 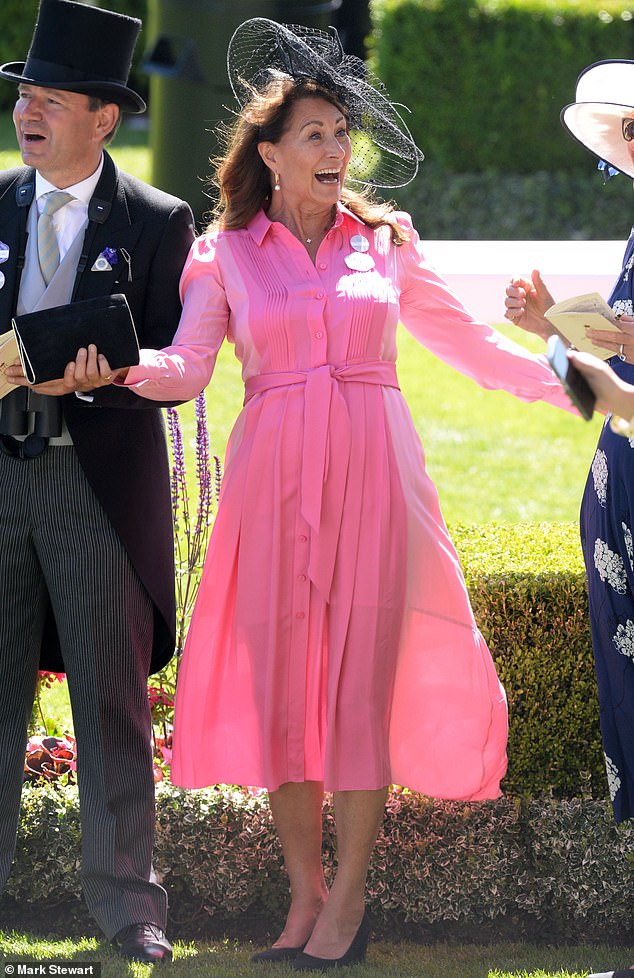 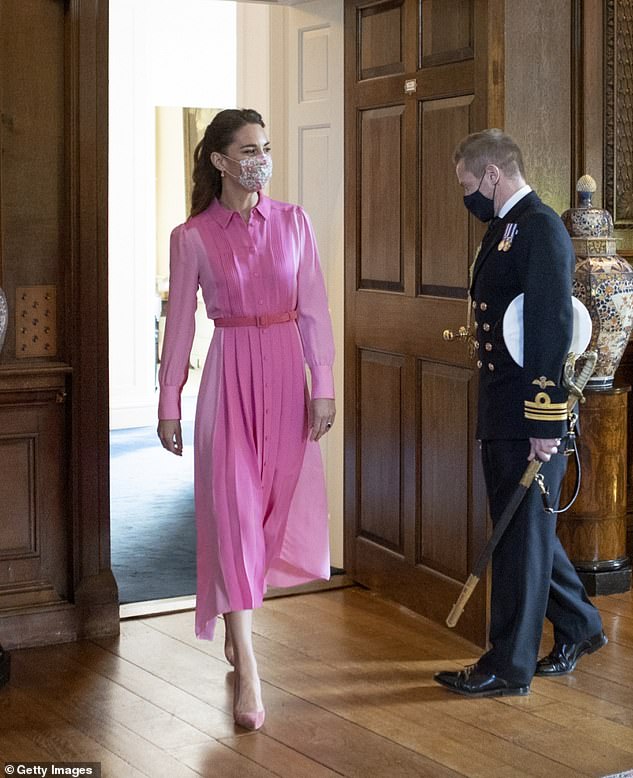 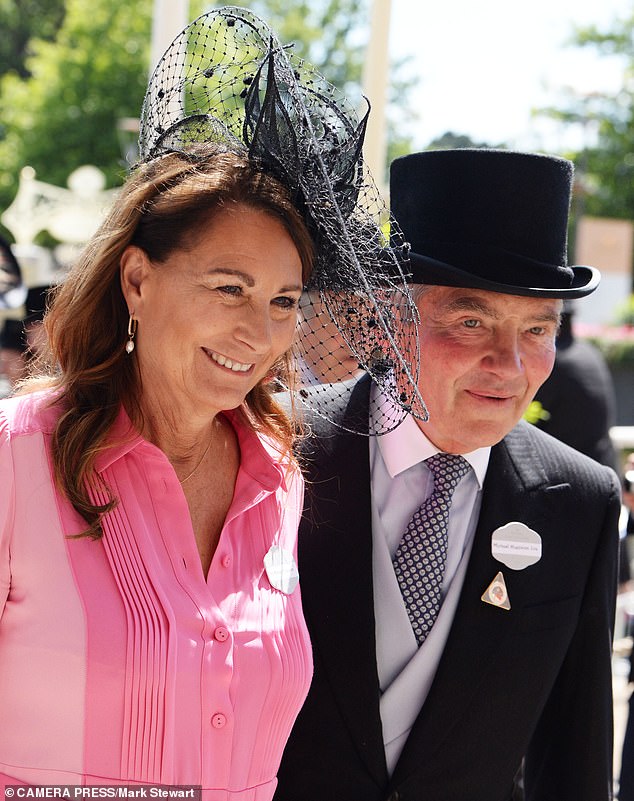 While at Ascot, Carole Middleton appeared to be in good spirits, perhaps cheering on one of the riders during a race

Scroll down for video 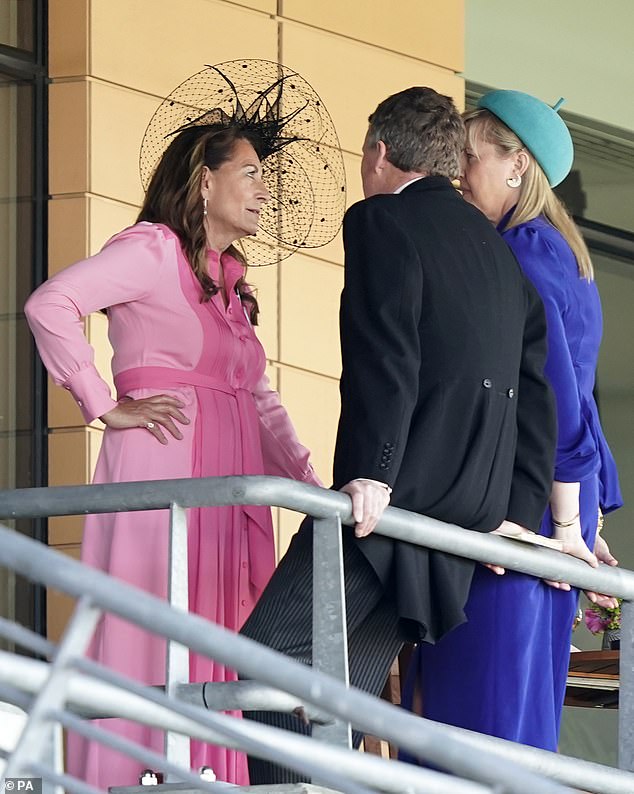 Carole teamed the frock with a black openwork hat with feathered adornments. She looked to be enjoying her day out as she chatted with fellow racing fans in the stands 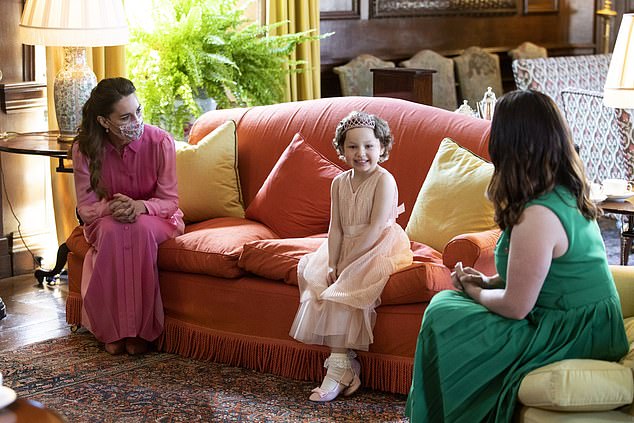 The Duchess had previously spoken to on the phone to the youngster, who underwent intensive chemotherapy for leukaemia last year meaning she was forced to shield during the height of the pandemic.

An image of her taken by her mother Lynda, entitled Shielding Mila, was one of the 100 images included in the Duchess of Cambridge’s book Hold Still: A Portrait of Our Nation in 2020.

Kate made good on a promise she made to wear pink, Mila’s favorite color, teaming her dress with tan heels and a floral face mask.

The Duchess is not attending Royal Ascot today, but the rest of the royal family was out in force, while the Queen missed the event amid her ongoing mobility issues. 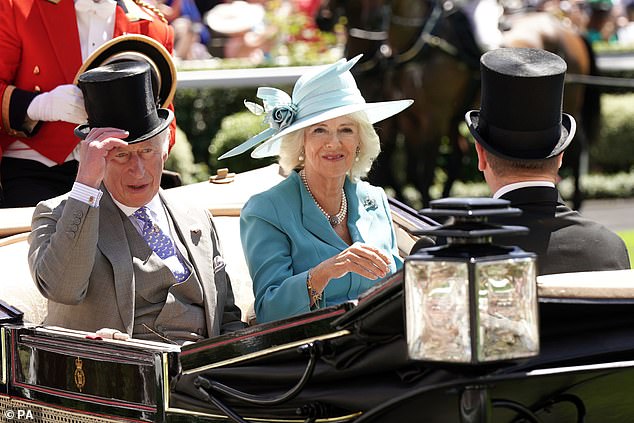 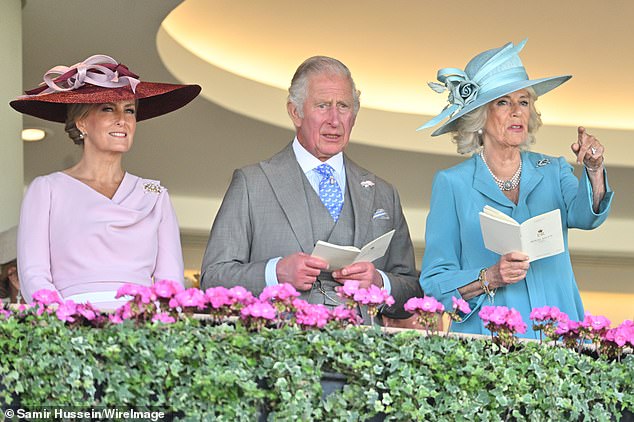 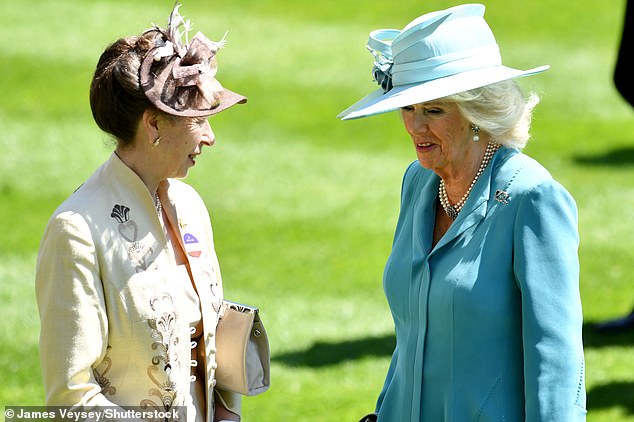 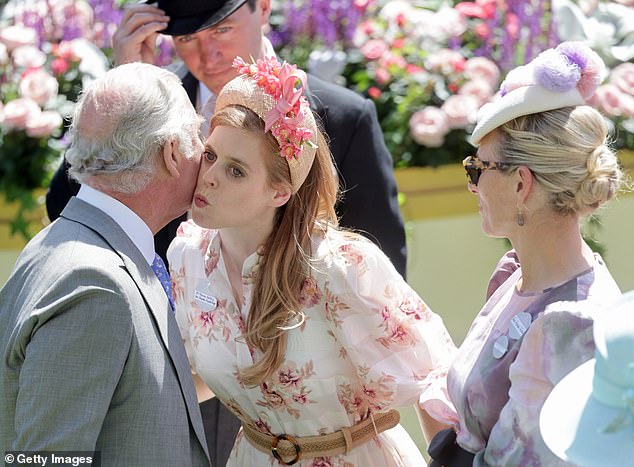 Meanwhile Princess Beatrice also offered Prince Charles a kiss on the cheek, while her husband Edoardo tipped his hat to the royal

Her Majesty was a regular at the Berkshire racecourse before the pandemic and has been at every Royal Meeting since acceding to the throne in 1952, apart from when it was held behind closed doors in 2020.

However the 96-year-old monarch will likely be watching from home just seven miles away at Windsor Castle this afternoon, especially when her horse King’s Lynn races in the King’s Stand Stakes at 3.40pm.

Instead, the Prince of Wales and Duchess of Cornwall were in attendance alongside a host of other royals – including Princess Anne and her two children Peter Philips and Zara Tindall, Countess Sophie Wessex and Princess Beatrice, who was joined by her husband Edoardo Mapelli-Mozzi . 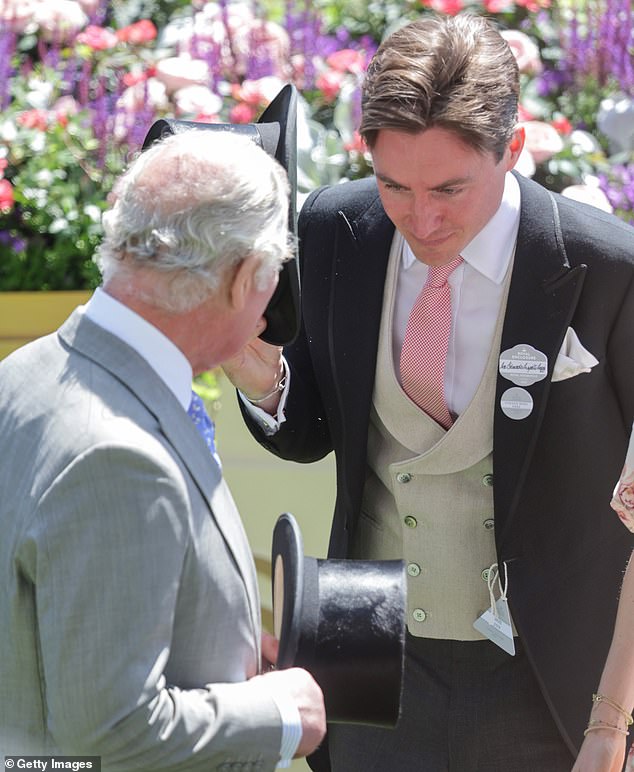 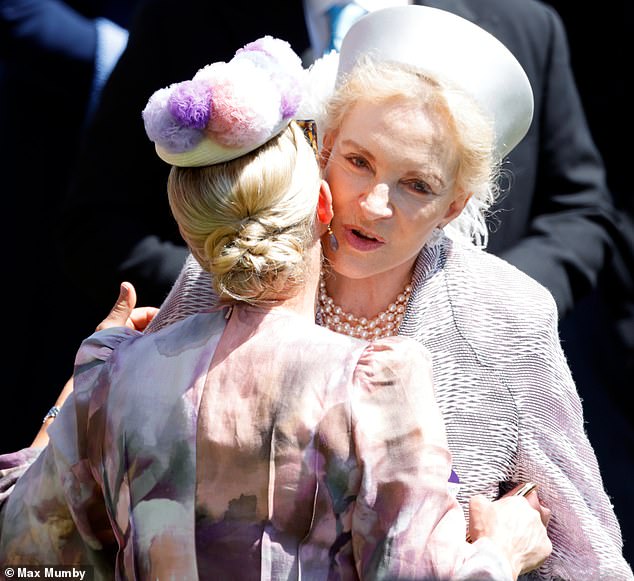 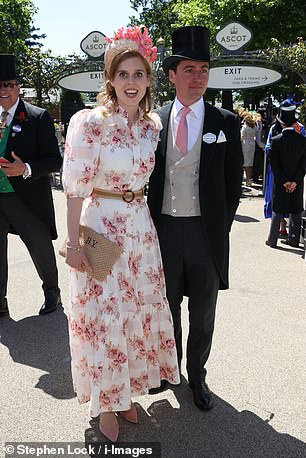 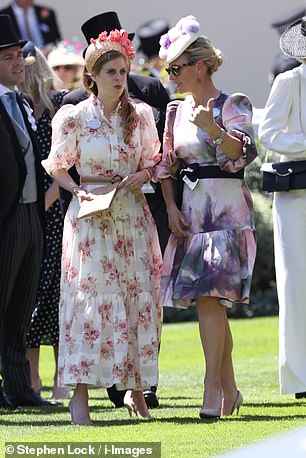 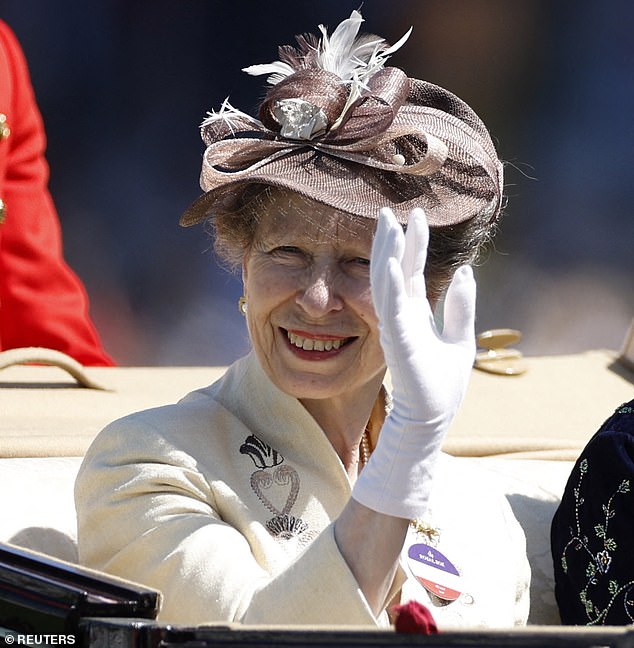 Meanwhile the Queen’s only daughter Princess Anne was also in attendance at the event, opting for a cream coat dress with a brown fascinator 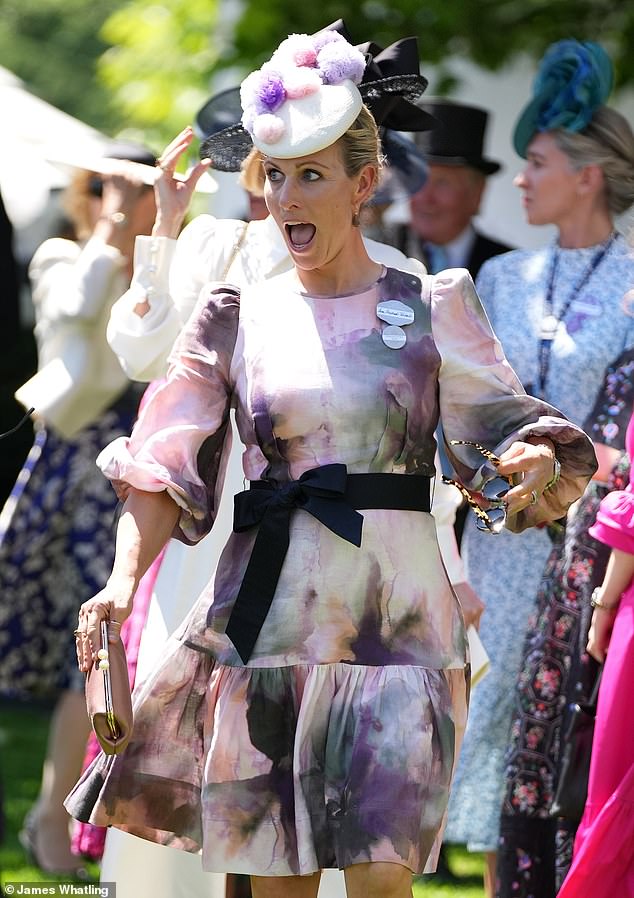 An excited Zara looked delighted to be back attending the races alongside her family today, with the royal beaming with glee as she arrived

Members of the royal family appeared in high spirits, with many taking part in the carriage procession before greeting one-another in the warm summer sunshine at the racecourse.

Zara could be seen affectionately greeting her uncle Charles, as well as Princess Michael of Kent, while Princess Beatrice was also beaming at the event.

The Queen, who has owned 22 winners of races at Royal Ascot, was among racegoers attending last year after it was selected to take part in the Government’s events research program on behalf of the sport of racing.

She did not attend the first day of last year’s races but was later present at day five with her racing manager John Warren and inspected her four horses in the Parade Ring after they crossed the finish line.

The Queen is a passionate horse breeder and has a number of runners scheduled to be entered at Royal Ascot this week.