Prime Minister Naftali Bennett warned Monday that his faltering coalition will collapse completely in a week or two if the growing number of renegade MKs within the ruling bloc don’t return to cooperating fully with the alliance.

Bennett made the remarks in the Knesset plenum after opposition lawmakers managed to garner 40 signatures, forcing the premier to appear for a symbolic hearing on his performance.

The prime minister delivered his speech roughly an hour after another member of his own party announced that he was quitting the coalition, leaving it with a minority of 59 MKs in the Knesset.

“There are members of the coalition who still haven’t internalized the importance of the hour,” Bennett said on the one-year anniversary of his government’s establishment. “I call on members of the coalition who are set on voting against the government, we have a week or two to get this straight and then we can carry on a long time. If not — then we cannot [continue].

“The choice today is between chaos and stability, between paralysis and growth,” Bennett said, recalling that he only agreed to form a coalition with many of his rivals from the left after former prime minister Benjamin Netanyahu repeatedly failed to cobble together a coalition, despite having sent Israel through a whirlwind of four consecutive elections and being prepared to send the country to a fifth parliamentary vote.

Bennett highlighted his government’s policy vis-à-vis the Gaza Strip, which he said was responsible for what has been the quietest period for residents of the south in years. He compared it to the 2021 Gaza war during Netanyahu’s final days in office, which also coincided with rioting in Jewish-Arab towns throughout the country. 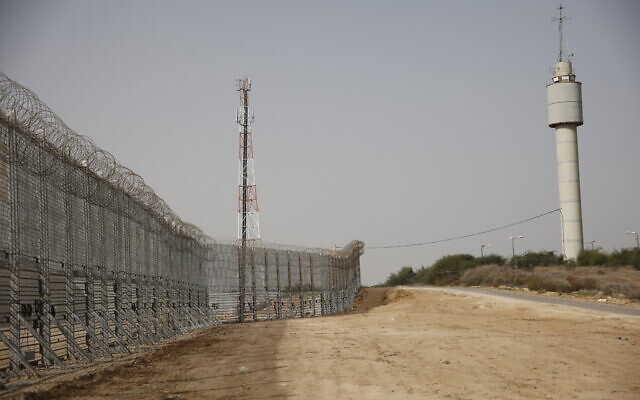 The premier went on to lambaste Netanyahu and the opposition for their conduct over the past year. “You incite all day instead of fighting the enemy,” Bennett claimed, taking particular issue with how Likud has criticized his partnership with the Islamist Ra’am party, the first independent Arab party to join a ruling coalition in Israel’s history.

“I saw [Likud] MK Israel Katz screaming at [Ra’am chair] Mansour Abbas. He said that Abbas was like [Hamas leader] Yahya Sinwar,” Bennett continued, accusing Katz of ignoring the fact that Netanyahu himself had covertly hosted Abbas several times at his official residence, in an effort to coax the Ra’am chairman to join a right-wing coalition led by Likud.

As prospects of such a coalition appeared to grow in spring 2021, Likud MKs were quoted in the media gradually warming to Abbas, praising him for his willingness to condemn terror attacks against Israelis and focus on civilian matters, rather than the Palestinian issue. But they quickly turned on Ra’am after the party joined Bennett’s coalition last June, taking to regularly calling party members “terror supporters.”

Bennett, in his plenum speech, expressed pride in his partnership with Abbas. “I put Mansour Abbas like a man,” he said. “I’m not ashamed.”

He then pointed to his government’s decision to let the Jerusalem Day Flag March of religious nationalists pass through the Damascus Gate and Muslim Quarter of the Old City, despite international pressure to reroute the rally to a seemingly less provocative path. The government also managed to get through the latest waves of the pandemic without imposing lockdowns, passed a budget for the first time in three years, raised the salaries of soldiers, and helped reduce crime in Arab communities by 40 percent, Bennett said.

He accused Netanyahu of operating a “poison machine” and admitted that his government had failed in countering it enough to prevent the defection of Yamina MK Idit Silman. The former coalition whip announced her resignation from the ruling bloc in April, shrinking its size to just 60 MKs in the Knesset.

Bennett then recalled how Netanyahu had warned on the day the government was established that it would not be able to stand up to the Biden administration to prevent the reopening of a US consulate in Jerusalem or the signing of a nuclear agreement. Both of those predictions have thus far been proven false. 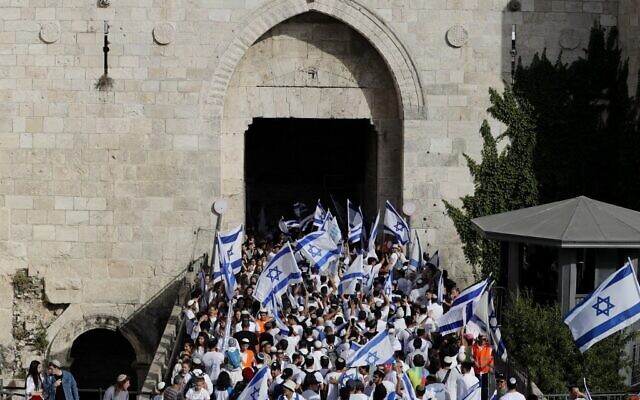 Jews taking part in the Flag March pass through the Damascus Gate to Jerusalem’s Old City on May 29, 2022, as Israel marks Jerusalem Day. (Ahmad Gharabli/AFP)

Speaking immediately after Bennett, Netanyahu mocked his successor for giving himself such good grades, when much of the premier’s staff had deserted him. Several of Bennett’s have resigned in the past month, as the coalition has appeared to advise near its end.

“You are not fighting for the country. You are only fighting for your seat,” Netanyahu said, again lashing out at Bennett for his cooperation with Ra’am and Abbas.

“Because you — Bennett, [Foreign Minister Yair] Lapid, and Abbas — are not fighting for our country, the citizens of Israel are afraid for their fate,” Netanyahu continued, highlighting the recent terror wave, as well as rising costs.

The former prime minister dismissed the notion that Russia’s invasion of Ukraine was the reason for the current economic crisis, claiming that he had managed to steer the country away from a similar decline when global markets were reeling.

“Your blackmail and protectionist government is crumbling. Its days are numbered,” Netanyahu declared, accusing Bennett of “stealing credit” for his earlier policies that preceded the year of quiet on the Gaza border.

He mocked Bennett’s recent appeal to the “silent Zionist majority” to back his government, saying that Israelis are not actually silent and that they want the Yamina leader to “go home.” 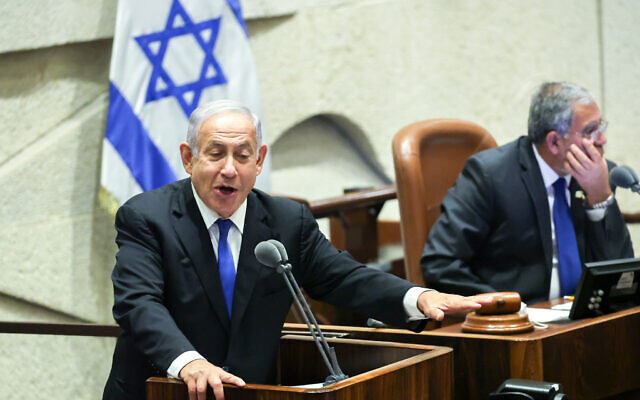 The session concluded with a symbolic vote on Bennett’s responses to the opposition’s critique. With not all of its remaining 59 members present, the coalition lacked a majority, prompting coalition MKs to leave the plenum before the tally was held. The vote was a symbolic 54-0, in favor of the opposition.

The much more practical blow for the coalition had come hours earlier, however, when Orbach, of Bennett’s Yamina party, announced his resignation.

Orbach, in a statement, accused “extremist, anti-Zionist elements,” such as Arab MKs Mazen Ghanaim (Ra’am) and Ghaida Rinawie Zoabi (Meretz), of pulling the coalition “in problematic directions” and “holding it hostage. ”

While Orbach, a long time ally of Bennett, said the coalition had failed in its main mission of “lifting [Israelis’] spirits,” he clarified that he would not vote in the coming week to disperse the Knesset and initiate snap elections. Instead, he vowed to work to form an alternative coalition with a “patriotic spirit” in the existing parliament — a tall order given that the Knesset appears to still contain a majority of MKs who refuse to join a coalition with Netanyahu.