BEIRUT — Lebanese negotiators said Tuesday they would be willing to drop demands for control of part of a gas field claimed by Israel, but in exchange would seek full control of another gas field that also straddles the countries’ offshore economic zones, an official said.

The offer, made Tuesday to a visiting US mediator for the maritime border deal with Israel, held back on demands for territory where Israel plans to imminently extract gas, an official said.

Beirut’s proposal however included a claim for all of a separate field that it had initially only sought part of, the official close to the negotiations said.

The new offer, which would give Israel the Karish field and Lebanon the Qana field, was made during meetings between Lebanon’s top leaders and US envoy Amos Hochstein, who landed in Beirut on Monday to relaunch indirect negotiations between Lebanon and Israel after a year-long pause.

Hochstein said after the meeting that the suggestions “will enable the negotiations to go forward.”

Hochstein told the US-funded Alhurra TV station that the Lebanese government took “a very strong step forward” by presenting a more united approach. He refused to give details about the Lebanese suggestions, saying “it’s about looking at what kind of a compromise can be reached that the Israelis can agree to and not feel that it is being pushed into something against their interest while still preserving the most important part of Lebanon’s interest.”

Lebanese authorities last week had requested Hochstein visit after a gas production vessel arrived in Israel to launch extraction operations in the Karish offshore field, drawing condemnation from Lebanon, which had laid claim to parts of it.

Israel says the field is part of its UN-recognized exclusive economic zone. 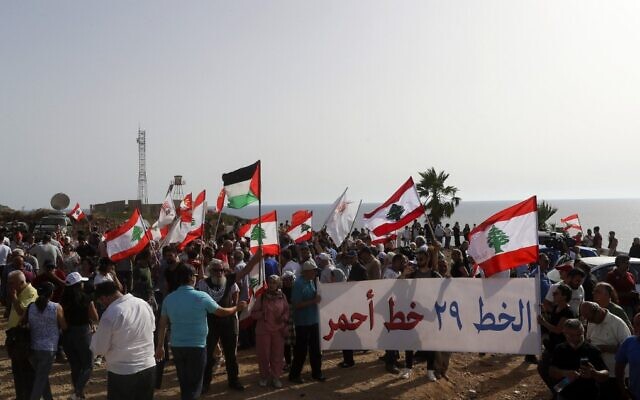 Lebanese protesters take part in a demonstration in the border town of Naqoura, on June 11, 2022, days after Israel moved a gas production vessel into the offshore Karish field, a part of which is claimed by Lebanon. (Mahmoud Zayyat/AFP)

Lebanon’s top leaders offered for the country’s maritime border to exclude Karish and instead include the whole of the nearby Qana field instead, though it had previously only partially claimed the zone, an official close to the negotiations said.

“We want the entire Qana field,” the official said on condition of anonymity because he was not authorized to speak on the issue.

Lebanon had initially demanded 860 square kilometers (332 square miles) of territory in the disputed maritime area, including part of Qana.

It then asked for an additional 1,430 square kilometers (552 square miles), also taking in part of Karish.

Hochstein will submit the new offer to Israel and relay its response to Lebanon.

Hochstein’s discussions with top Lebanese officials focused on ways of reaching a solution amid rising tensions, as Lebanon’s Iran-backed Hezbollah terror group and Israel exchanged threats. Hezbollah’s leader last week warned he would strike the gas rig at Karish if drilling starts before an agreement is reached. The heavily armed Hezbollah, which has fought several wars with Israel, has repeatedly said in the past that it would use its weapons to protect Lebanon’s economic rights. A Lebanese official who attended the meetings told The Associated Press that Beirut’s claim last year on an additional area — known in Lebanon as Line 29 — had been dropped.

“The Israelis are totally refusing to talk about Line 29,” the official said, speaking on condition of anonymity because he was not authorized to discuss the negotiations with the media.

Prime Minister Naftali Bennet criticized the Lebanese leadership, saying on Tuesday that instead of using gas “for the benefit of its citizens, that same leadership is busy fighting internal and external disputes.” 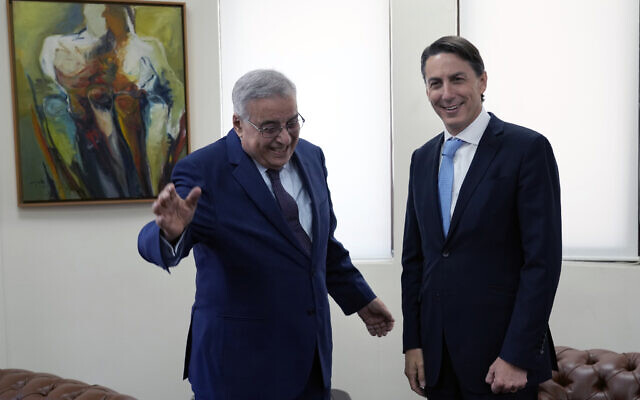 The dispute over the maritime border is more than a decade old. In 2012, Lebanon rejected an American proposal of getting 550 square kilometers (212 square miles), or almost two-thirds of the area, while Israel would have gotten the remaining third. The offer was known at the time as the “Hoff Line,” after US diplomat Frederick Hoff who was mediating then between the two countries.

Lebanon and Israel last fought a war in 2006, have no diplomatic relations and are separated by a UN-patrolled border.

They had resumed negotiations over their maritime frontier in 2020 but the process was stalled by Beirut’s claim that the map used by the United Nations in the talks needed modifying.